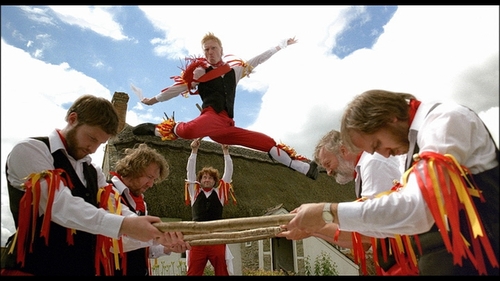 Having booked twenty tickets and found that they had disappeared in the hands of the ticket sellers to sell on in case I didn’t turn up, mild palpitations did rattle my coolness. If I had known that 180 of the 220 tickets had already been sold leaving just 40 for those gamblers turning up at the door, then a heart warming glow caused by mild stress would have rapidly transformed itself into major panic. They were obviously anticipating a good turnout – the hall was already pretty much half full by the time we got to official opening time.

A group of Morris men – whose average age must have been over …(ahem)? presented us with an amusing demonstration of various dances from their regular repertoire – along with a bit of …. ummmmm…. some singing. Despite one dance being labelled as a "walk to music" all were enough to make you break out into a sweat just watching them. With chests aheaving – from being out of breath of course – they leapt, cavorted, hopped and skipped across the stage with flailing hankies and thwacking sticks. The audience giggled and clapped enthusiastically and the more they laughed the greater the hops and leaps. These guys were obviously performers enjoying basking in the spotlight of enthusiastic attention.

Warm up over – the film was now set to start. Hooray! However, having read a review recently by someone who suggested that, although the film was thoroughly enjoyable it was likely to be a shot in the foot for the Morris world – I did have a moment of nervous anticipation. What if she were right and the film needed more Morris dancing to give it added depth? Did it really matter that a musician was not included in the story line? What if the story line were not as intricate as I remembered from reading the script? I didn’t worry for long as the film took off taking their audience with them – all fears unfounded. It really was a laugh a minute – except for the sad bits, you know funerals and stuff – and then it was a reverential silence punctuated with a sniffle or two. With an audience of mixed ages and mixed social backgrounds – everyone seemed to love the whole experience. In fact I can’t remember when I have been to a screening when the audience has laughed so hard and for so long. The previously read critique went out the window as the vibrant atmosphere of this hall told me that these aforementioned details were pretty insignificant. The film did not set out to be an educational documentary about the historical intricacies of age old practices but rather a bit of fun poking at our quaint traditions and our idiosyncratic nature as Brits proud of our heritage.

The film is full of quirky surprises that kept everyone on their toes. This ingredient alone is definitely a bonus especially in an industry that seems to be able to churn out so many scripts with very predictable story lines. And boy oh boy do I get disappointed if I guess the ending within the first ten minutes of the opening credits. Reminiscent of Ronnie Barker’s fantastic skill with his regular play on words there were many moments of poking fun at the more eccentric side of our Britishness. If anything there were too many witticisms – people were so busy laughing we missed the next quip – or we ran out of steam and just couldn’t laugh any more. Just like Alan Titchmarsh – our cheeks were aching!

The star studded cast were brilliant – and it certainly has its list of celebrities. Sorry but I have to list as many of them I can remember just to show you what I mean – in no particular order of preference you understand >> Derek Jacobi, Naomie Harris, Ian Hart, Richard Lumsden, Clive Mantle, Aidan McArdle, Lucy Akhurst, Dominique Pinon, Sophie Thompson, Harriet Walter, Greg Wise, Brodie Bass, Andy Black. Ben Bela Böhm, Jasper Britton, Adam Ewan, Pascal Langdale, Charles Thomas Oldham, Aaron Sweeny-Harris and Hillary Wood.

The story centres on Derecq Twist, played brilliantly by Charles Thomas Oldham who incidentally is responsible for giving birth to the script. Derecq is not exactly streetwise in the world of fast cars and high rise buildings. However, he’s not stupid either – a revolutionary at heart despite the fact that at times you could be forgiven for thinking that he’s not the brightest star in the sky. Derek Jacobi was as superb as ever playing Quentin Neely whose insidiously timed smiles belied a darker side to a seemingly friendly character. Harriet Walter is a star anyway and she played her part of eccentric Professor with fantastic style. I loved Clive Mantle, Sophie Thompson and Jasper Britton who were wonderfully comical whilst retaining the seriousness of true country folk. Aidan McArdle was superb as The Producer – it can make me giggle thinking of some of his ‘looks’ which ranged from complete bemused flummoxedness to odd moments of startled amazement. I could go on but perhaps it will spoil the experience for you if I reveal too much of who does what – you will just have to see it for yourself.

There was one thing that we could not ignore whilst being entertained by the film and that was the Morris Dancers themselves who had kindly given us the entertaining demonstration earlier. A famous director recently interviewed by the Culture Show – sorry his name escapes me – said that to make a successful blockbuster movie you have to make your film for the people you portray. Well you guys at Twist Films – you certainly have a hit here! I was quite convinced that although the merry band of men did not require medical assistance before, during or after their cavorting on stage – they were in danger of needing it now. I have not seen shoulders shake so much, nor heard such loud guffaws punctuated with hefty foot stamping, hand smacking and thigh slapping as I did on this laughter infested night. Their enjoyment of the film seemed totally out of control to the extent that I kept expecting someone having to dash in trundling in an oxygen cylinder because one of them was in a state of collapse on the floor. So – Twist Films – if you managed to pass the test with them and keep them well entertained- then you have obviously done your research well and you have a blockbuster in the making.

If you do a search on Google for "Morris: A Life with Bells On" over 4,400 sites come up – anything from blogs, quotes, articles, reviews and links back to the film’s main website .There is a buzzing on the internet and it is getting louder. As of 23rd February there are over 7000 signatures on the petition; 2,900 members in the Facebook group, and over 1000 followers on an unofficial Twitter account. The last of which was only set up about a week ago. More importantly the official website, http://www.morrismovie.com is getting over 110,000 hits per WEEK which is on a par with a proper film release with a proper promotion and advertising budget. These statistics alone should be enough to impress the most sceptical of us especially as these have been generated totally by ‘word-of-mouth’.

There have been articles in the Telegraph, Independent, Guardian, and Daily Mail plus many regional publications. Alan Titchmarsh, Chris Evans and Philip Schofield – have all featured the Morris film on their shows giving it significant air time – never mind all the regional radio stations doing their bit to promote what they see is a good film.

The latest excitement in just the last few days, US CBS News is doing a piece about the film and will be attending the matinee performance at Tisbury on the 14th March. And …. Morris is the now a part of the official selection for the Seattle International Film Festival – the biggest film festival in America. As we know after Slumdog Millionaire’s struggles before enjoying its successes, this could be the long awaited gateway to achieving the dreamed of status.

So if you think that this could tempt you out one night with your own merry band of men – and women – sign the petition, express your interest. You never know the distributors will take note and go for a general release and bring the Morris: A Life with Bells On film to a cinema near you. With any luck you too will get an enthusiastic audience who will make the atmosphere of the whole experience so much more enjoyable. I hope so – the country could certainly do with a laugh – couldn’t it? Visit the "Morris: A Life with Bells On" website – to see the trailer

Sign the petition to get the film shown near you.

"Morris: A Life with Bells On" – the plot and characters

A bit of History about Morris Dancing (from "Morris: A Life with Bells On" website)

Charles and Patricia Lester – designers and makers of costumes for Magenta played by Hilary Wood.