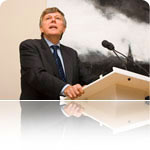 Book now for this rare and exceptional event that will inspire you to do well in any of your enterprising activities. Founded two Multi-Billion Pound Businesses in the last 30 years (Internet Bank Egg and Firstdirect Bank). He also created two other spin off businesses while he was the CEO of Mercury Communications… so after growing four businesses to over a Billion Pounds of valuation Mike Harris knows how to get things moving.

Mike has also recently completed his book "Find Your Lightbulb" which draws on his experiences as well as top entrepreneurs from both sides of the Atlantic.

Is a masterful entrepreneur with over 9 companies in 15 countries. He has built several large publishing and media businesses, he has a Resort in Bali and Real Estate business in Singapore. With all those businesses he has still found time to write two books and speak to over 100,000 people about how they can build leading businesses.

On the night, Roger and Mike will each have 40 minutes to sum up the key things you need to know if you want thrive in ALL economies. After their presentations there will be 40 minutes of Q&A followed by networking.

Both of these heavyweight entrepreneurs want you to be able walk away from this event and confidently say "I’m excited about the next 12 months".

Mike will speak on:

* How to deal constructively with negative people or ideas.
* How to get started in the most powerful ways.
* Where to get great ideas.
* How to stay balanced between your big vision and your day to day results.

"The companies I have focused on in the past 20 years have been new and innovative. Far more important than the economy, the media and the politics is your vision, your team and your ability to turn criticisms and negativity into some of your best assets."

Roger will speak on:

* How to find your path of least resistance to wealth.
* How to build a great team.
* Your greatest asset as an entrepreneur.

"In times of change, opportunities are everywhere…In the late 70’s, there was oil shortages, unpopular wars, dishonest politics and environmental meltdowns. The US dollar had lost its strength, the media was in a frenzy and many people were scared that there wouldn’t be enough to go around. However it was also in those same years that some of the fastest growing companies in history were formed – Virgin, Apple, Microsoft, Oracle – to name a few."

With such a powerful and insightful event – make sure you are NOT double booked that night, so that you’ll be ready to double everything else …

"Most UK entrepreneurs are struggling to achieve incremental growth in the current economy, not because of common (yet over hyped) cyclical factors, but because they are simply focusing on the wrong things."

This event features Mike Harris, the creator of 3 multi-billion pound business start ups (Internet Bank ‘Egg’ floated for £1.3B less than three years from launch!). It also features Roger Hamilton, who is fast becoming one the world’s most popular speakers on entrepreneurship (and a heavyweight entrepreneur himself with over 15 companies).

Explains that startups (£0-£10M/annum) must do things differently from the very beginning if they want to break the glass ceiling of an ‘SME’ and grow into a ‘billion dollar baby’.  Even if you don’t achieve the big "B" as Mike has (thrice), his recent book "Find Your Lightbulb" is simply brilliant and seeing Mike speak LIVE leaves you with a whole new perspective on how to create more Profit, Liquidity and Growth in your business – whatever the size.

"A unique networking opportunity… ‘DOUBLING EVERYTHING’ will be attracting the who’s who of the entrepreneurial community."

Seating for this event is limited so book your discounted tickets today.

There is a big difference between the founder who is still still working ‘in the business’, and the leader who has advanced to working ‘on the business’.  It’s not impossible, yet it does take planning and an understanding on how to leverage your time.

Internationally recognised entrepreneur and the worlds leading authority on building powerful teams.  He has 14 companies operating in 15 countries including a resort in Bali, Expat Magazines and Rental Services in Asia and a Global Network of Entrepreneurs. He is a best-selling author and world-class speaker who has spoken to over 100,000 people internationally!

For the first time, these two heavyweights of the entrepreneurial community come together with the specific intention of sharing their best insights of over 60 years of combined business experience to help show you how to DOUBLE EVERYTHING.

Tickets are normally £59, however you are invited to attend for just £29 inc VAT… and that will include a copy of Roger Hamilton’s best selling book "WINK", and Mike Harris’s new book "Find your Lightbulb".